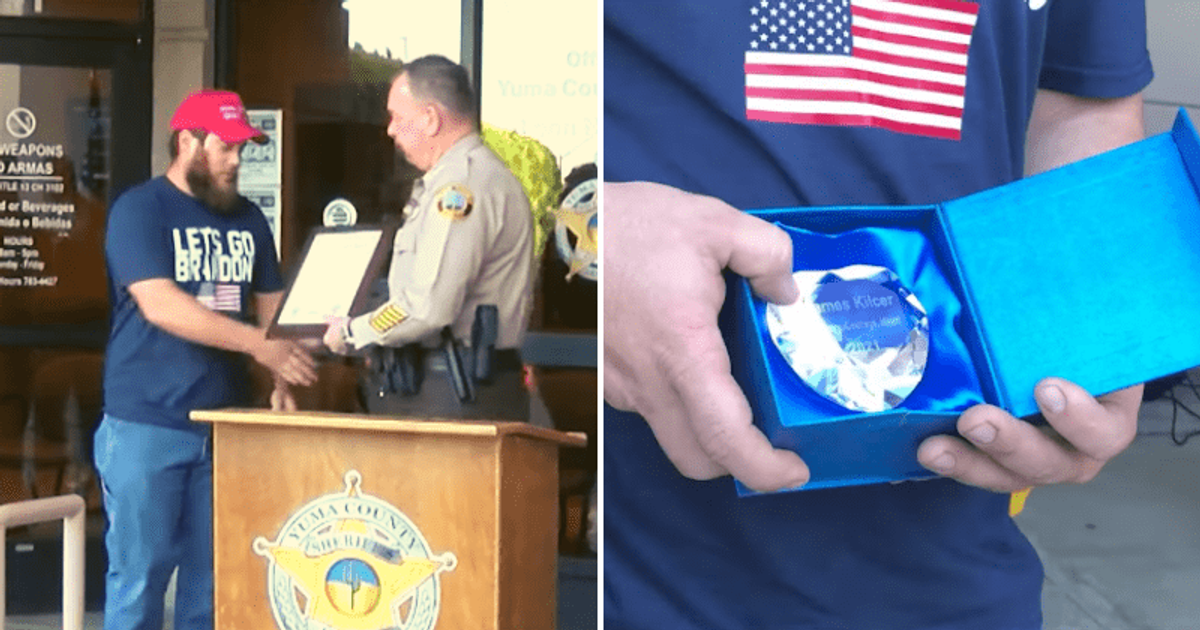 A United States Marine Corps veteran who stopped an attempted armed robbery at an Arizona convenience store wore a “Let’s Go Brandon” t-shirt as the Yuma County Sheriff’s Office awarded a prize for his “extraordinary heroism and exceptional courage”.

James Kilcer, 32, received the Citizen’s Valor Award on Tuesday, October 26, in light of his bravery in the incident on October 20. Sheriff Leon Wilmot said Kilcer was remembered for his “extraordinary heroism and exceptional courage while willingly assisting another citizen in an incident involving criminal activity at extreme personal risk, putting his life in danger,” with the aim of saving or protecting human life ”. The sheriff’s office describes the award as “the highest honor for citizens whose actions deserve recognition.”

The ‘Let’s Go Brandon’ meme was born on October 3 when NBC sports reporter Kelli Stavast interviewed NASCAR driver Brandon Brown at the Talladega Superspeedway in Alabama after the racer claimed his first career NASCAR Xfinity Series victory. Stavast was filmed reporting the crowd in the stands behind chanting “Let’s go, Brandon!” when in reality they were chanting “F ** k Joe Biden”. The phrase has since become an anti-establishment slogan.

Kilcer, who also wore a red “Make America Great Again” cap when accepting the award, told Fox News’ America’s Newsroom last week that he took his safety and the safety of others around him “very seriously” . “I turn to leave, I sort of walk out and as I turn around I hear the door open very aggressively,” Kilcer recalls. “At that point, the ‘spider senses’ were tingling a bit.” Three unidentified suspects burst into the store with an armed leader in mind. “I saw two other guys with no other gun and decided this was the guy I’m going to hit,” Kilcer said.

The veteran then grabbed the gun and, without hesitation, hit the other suspects with a bag containing his store purchases, all in one movement. He said his bag included two Gatorades, two energy drinks and “a snack”. “I was actually going to take control of his head and his gun at the same time, and the bag was just heavy and strapped to me and he smashed it right in the face,” Kilcer said. “I was ready. I saw him coming. The minute my hands closed around him, I never lost contact with the gun. And I pulled him down,” he explained.

As Kilcer kept the suspect on the ground until law enforcement arrived, the gas station clerk – though “a little pissed off” – jumped over the counter to chase the suspects away. The officers who responded arrested the armed underage suspect and took him to the Yuma County Juvenile Justice Center on one count of armed robbery and aggravated assault.

That said, while Kilcer’s actions were heroic, they are not recommended for anyone who thinks they can take down an armed individual, according to Chief Donnie Lucas of the YPG Police Department. “The law enforcement community advises untrained civilians, non-combatant civilians who have not taken any law enforcement or disarmament course or military-type training, not to hire an armed man or a suspect armed with a knife, or a machete, or any other weapon, ”he said. “In most cases, it would be better if you complied with the request they make.”

It should be noted that Kilcer served as a tactical air operations technician in the Marine Corps and was deployed to Afghanistan during his time in the military. He attributed his spontaneous actions to his basic training and his Marine Corps mindset. “To be in this frame of mind if something happens, I will have to and I will respond appropriately,” he explained. “I was just ready. I really didn’t know how quickly I reacted. During this time, Kilcer also received awards from the Marine Corps, Chevron, American Legion, and the Yuma community for his bravery.