After a well-deserved summer getaway, Kate Middleton is back in action! On Sunday morning, the Duchess of Cambridge made an appearance at a sailing event in Plymouth to support 1851 Trust, a charity that uses sailing and the maritime industry to inspire children in sports, education and technology.

For the engagement, the royal style icon looked sporty in a striped shirt from Erdem and white shorts with gold detailing from holland cooper. She wore her hair in loose waves and paired her nautical ensemble with White Superga trainers and simple gold jewelry.

During the outing, Kate, who is the nonprofit’s Royal Patron, met young people and learned about seagrass beds, a natural tool that helps reverse the damage caused by climate change. . There they also helped make seagrass mats which should be planted off nearby Plymouth Sound to help improve marine health.

Afterwards, the Duchess changed into an even sportier ensemble and joined the Great Britain SailGP team aboard her F50 hydrofoil catamaran in a friendly “Commonwealth Race” against Team New Zealand. Also present was Sir Ben Ainslie, who is considered the most successful sailor in Olympic history. She acted as a crew member for the British team and helped them as they raced their yacht against their rivals. 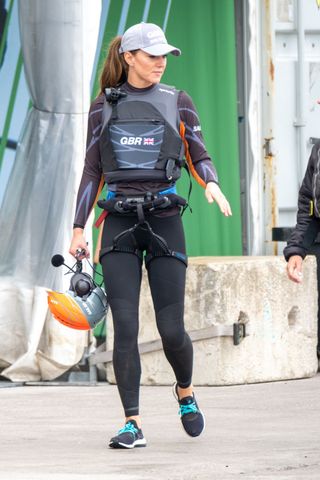 This is not the first time that Kate has taken part in a sailing race. In 2019, she and Prince William competed in the King’s Cup Sailing charity race on the Isle of Wight. The Duke of Cambridge’s team came third, while his wife’s team was disqualified. Before that, the two also competed in a 2014 sailing race in Auckland, New Zealand, where Kate emerged victorious.