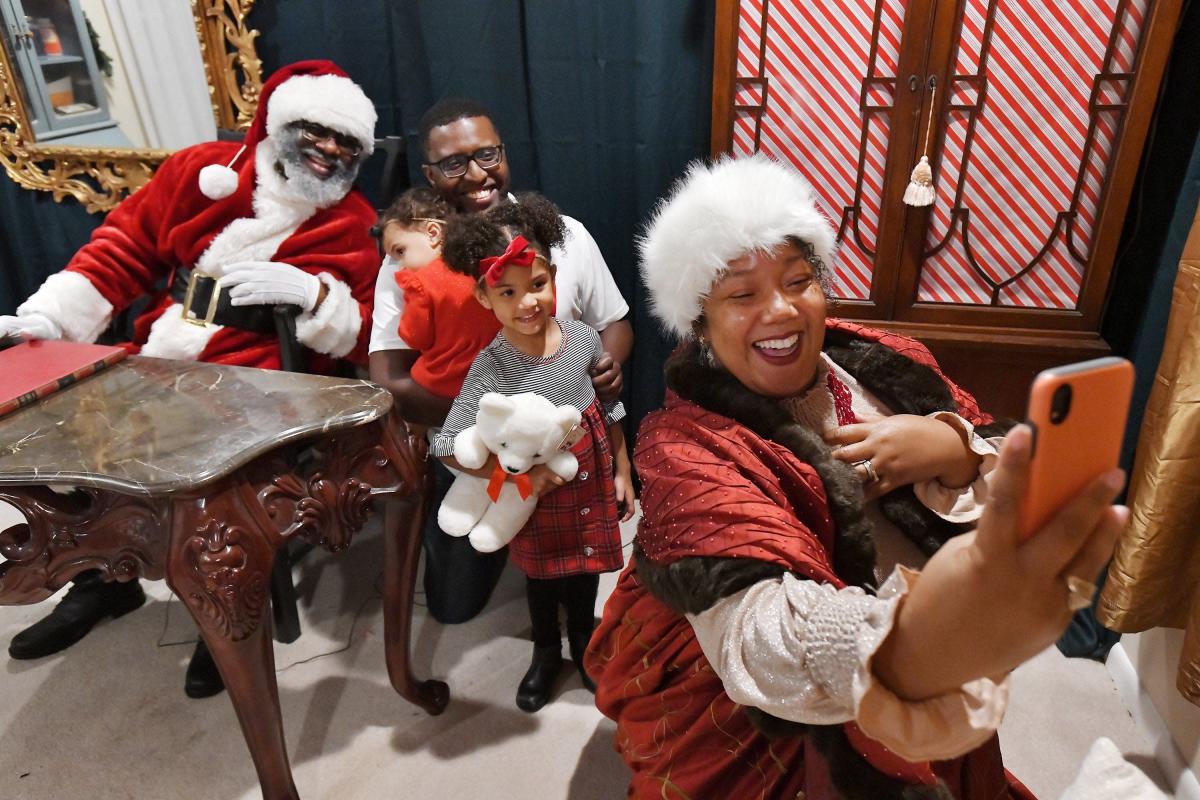 ‘Someone who looks like you:’ It’s more than a red costume for this Santa Claus and Mrs. Claus

As a new family waits outside the house decorated with Mr. and Mrs. Claus, who sits comfortably in a housing estate north of Fort Caroline Road, Santa turns to his wife.

Mrs. Claus opens the front door, and come Grace and Larry Williams, along with their daughters Laila, 3, and Vivian, 1, who wear holiday dresses and shy smiles.

Behind a decorated desk, in a room with a Christmas tree and floor-to-ceiling curtains, Santa Claus waits, a reassuring smile behind his gray beard.

Laila is shy, in wonder, as she walks slowly towards him, holding her mother’s hand. Vivian clings to her father’s chest.

This shyness at first is normal, Mrs. Claus would later say, “It can be intimidating to meet the guy in the big red suit.”

Soon however, after a few songs and chatter, the girls are smiling, taking selfies and high-fives with Clauses, ringing green bells, catching ornaments on the tree.

The Williams’ said they wanted their daughters to meet this Mr. and Mrs. Claus, in particular, because Laila recently pointed out to her parents, for the first time, that her father is black and her mother is white. So what is she?

Larry Williams told him: You two are. You can be whoever you want.

This is one of the reasons the family came to see Santa Claus and Mrs. Claus, who are black.

“We wanted to show her that she can be whatever she wants to be,” said Larry Williams. “And Santa can be who she thinks he is.”

This is America: The colored Santas are the most magical part of my Christmas experience. We need more of them

‘What you need him to be’

Shawn Coley and Natasha Spencer-Coley have played Santa Claus and Mrs. Claus for the past two years. They’ve attended downtown Art Walk, a food truck event, schools, and private events. Now they are offering “Selfies with Santa Claus”, for $ 75, during which families come to their homes to take photos and create memories.

They are both native of Jacksonville. He is 51, graduated from Lee High and went on to spend a good 13 years in the Marine Corps. He now works in IT at the post office.

She is 44, attended Stanton College Prep, and then worked for various nonprofit organizations. She does now online cooking and craft classes, from home (search online for Life at Coley Manor and Christmas with the Coleys).

Spencer-Coley adores the holidays and all their traditions, and acknowledges that she is “overdone” with her enthusiasm for Christmas (her house, for example, has three decorated trees).

Shawn Coley might not be that enthusiastic, but he’s doing his part. After all, he’s wearing the red suit, cap, and black boots, and he’s grown his grizzled beard to the proper length of Santa Claus.

“Do you mind if I share a little?” Spencer-Coley asks her husband.

She shares: She came from a financially stable family and has never missed Christmas. He grew up in social housing at Hollybrook Homes, the youngest of five children; Christmas presents weren’t always guaranteed and the holidays weren’t that different from other days.

Spencer-Coley explains, “He built that kind of shell around ‘Christmas doesn’t matter’ because of what he had to go through as a kid, right? So that was important to me, and I had to convince him that it was worth it. You can be celebrated. It’s good to love Christmas. It’s good to participate. “

For Shawn Coley now, playing Santa is more than just donning a red costume and ho-ho-hoing every now and then.

“It was hard for me, when I was a kid, to identify with Santa Claus. But to see someone who looks like you, you have something in common. It also helps to believe a child, to believe in Father. Noel. They can relate to: He looks like me. “

He laughed as he spoke of a girl who told him that she had seen a lot of white Santa Claus, and then there he was, a black Santa Claus. How does it work, she asked him? Does this mean that there are a lot of different Santa Claus?

It’s not just children who are happy to see a Santa Claus who looks like them.

“We just did a birthday cake delivery for the 76th birthday, like Santa Claus and Mrs. C,” Spencer-Coley said. “And to see her light up, because she’s never interacted with a black Santa Claus – that was really powerful, the level of joy to create this memory.”

At the Coleys’ house, the Williams family and Mr. and Mrs. Claus sang songs: “We Wish You a Merry Christmas”, “Jingle Bells”, “Rudolph the Red-Nosed Reindeer”.

They took pictures and read “12 days of Christmas”.

“I don’t know why they made me look so old in this photo,” Mrs. Claus said.

And they went through the list of gifts requested by Laila. It’s short, but a pretty good list.

Santa, who seems to have inside information, nods. Can do.

“And a little brother,” Laila says.

Santa Claus laughs. “I can’t do everything.”

But it could work. Grace Williams is having a baby boy. And it is expected for Christmas.