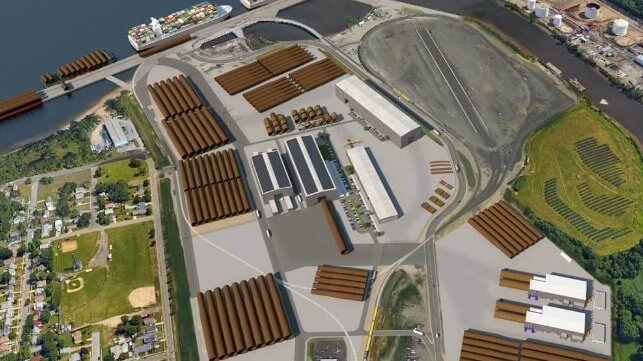 
The State of New Jersey is committed to creating new jobs, economic impact and clean energy through the development of the offshore wind industry off the East Coast of the United States – and it is supporting its efforts with more a billion dollars of public and private investments.

Over the next decade, this new industry will bring in investments estimated at $109 billion, and New Jersey officials want to ensure the state takes advantage of its ports, infrastructure and workforce. work qualified to claim its share. Centered in the middle of the wind power rental areas of the Atlantic Coast, New Jersey has prime real estate for the installation and operation of offshore wind turbines. The South Jersey Port Corporation and major state agencies are “all in” to capture a large share of this fledgling industry.

The opportunity is vast. The United States has set a goal of installing 30,000 MW of offshore wind, and more than half of that national goal can be achieved in New Jersey and New York alone. As a measure of industry interest in the area, February’s auction for six rental blocks in the New York Bight area brought in $4.37 billion – the highest total ever paid in a round competitive offshore leasing of any kind in the United States, including oil and gas leasing.

New Jersey has been working for years to prepare for this moment. He has been planning and investing in offshore wind infrastructure for over a decade, and now the stars have aligned for the state to reap the benefits.

In 2019, the state awarded a 1,100 MW power supply contract to Orsted OceanWind I, which is scheduled to be commissioned by 2024. Earlier this year, the state awarded an additional 1,150 MW to Orsted for Ocean Wind II and 1,500 MW to EDF Renewables/Shell for its Atlantic Shores offshore wind project.

To support these new projects, Governor Phil Murphy has allocated $265 million for the development of the future New Jersey Windport which will serve as a staging site for wind components. These funds are in addition to $13 million committed by the New Jersey Board of Public Utilities and $45 million in partnership with the New Jersey Department of Transportation for dredging projects.

The Wind Port is the nation’s first $300 million infrastructure investment that will provide a dedicated location for essential staging, assembly and manufacturing activities. It will be located on an artificial island on the east bank of the Delaware River near Salem, New Jersey, with an approach channel that has no vertical restrictions. It is expected to create 1,500 jobs and $500 million in annual economic activity.

In the long term, the New Jersey Windport has the potential for over 150 acres of additional manufacturing and development opportunities. Several potential tenants have already expressed interest in the site, including Ørsted and Atlantic Shores. The two offshore wind developers have indicated that they intend to build their projects at the Wind Port. Their winning bids also included proposals to partner with turbine manufacturers GE and Vestas to build nacelle assembly facilities at the port.

Impressive as it is, the Wind Port is just one of the manufacturing sites and marine terminals springing up to support this new industry in New Jersey. With commitments from Ørsted, EEW America Offshore Structures is building a $300 million clone of its German monopile fabrication plant at the Port of Paulsboro, which is owned by the South Jersey Port Corporation (SJPC). The investment will transform a former petrochemical tank farm in the Port of Paulsboro into a major manufacturing center for offshore wind turbines. At full construction, EEW’s Paulsboro site will include six massive manufacturing facilities and 500 employees – working three shifts a day, six days a week – to produce 100 massive monopiles per year.

SJPC’s foresight and planning made this job-creating project possible. Since 2009, SJPC has invested nearly $400 million to build a heavy deck port at the Port of Paulsboro to serve as a general cargo port, with the vision that it would eventually be an ideal location for the emerging offshore wind industry. .

Seven miles north of Windport, SJPC is upgrading its Salem marine terminal. With its multimodal rail links and barge berths along the river, the Port of Salem is ideal for offshore wind logistics support and maintenance.

These sites are located within 60 miles of the Federal Wind Energy Priority Zone, and they have space and facilities available to support offshore wind activity today. The South Jersey Port Corporation has over 500 acres of affordable, available land to meet the needs of offshore wind companies. These sites have excellent infrastructure connections, including dockside rail access to Camden, Paulsboro and Salem, as well as strong CSX and Norfolk Southern rail services.

For more information about South Jersey Port Corporation and to contact us, please visit https://www.southjerseyport.com/contact/.


The opinions expressed here are those of the author and not necessarily those of The Maritime Executive.