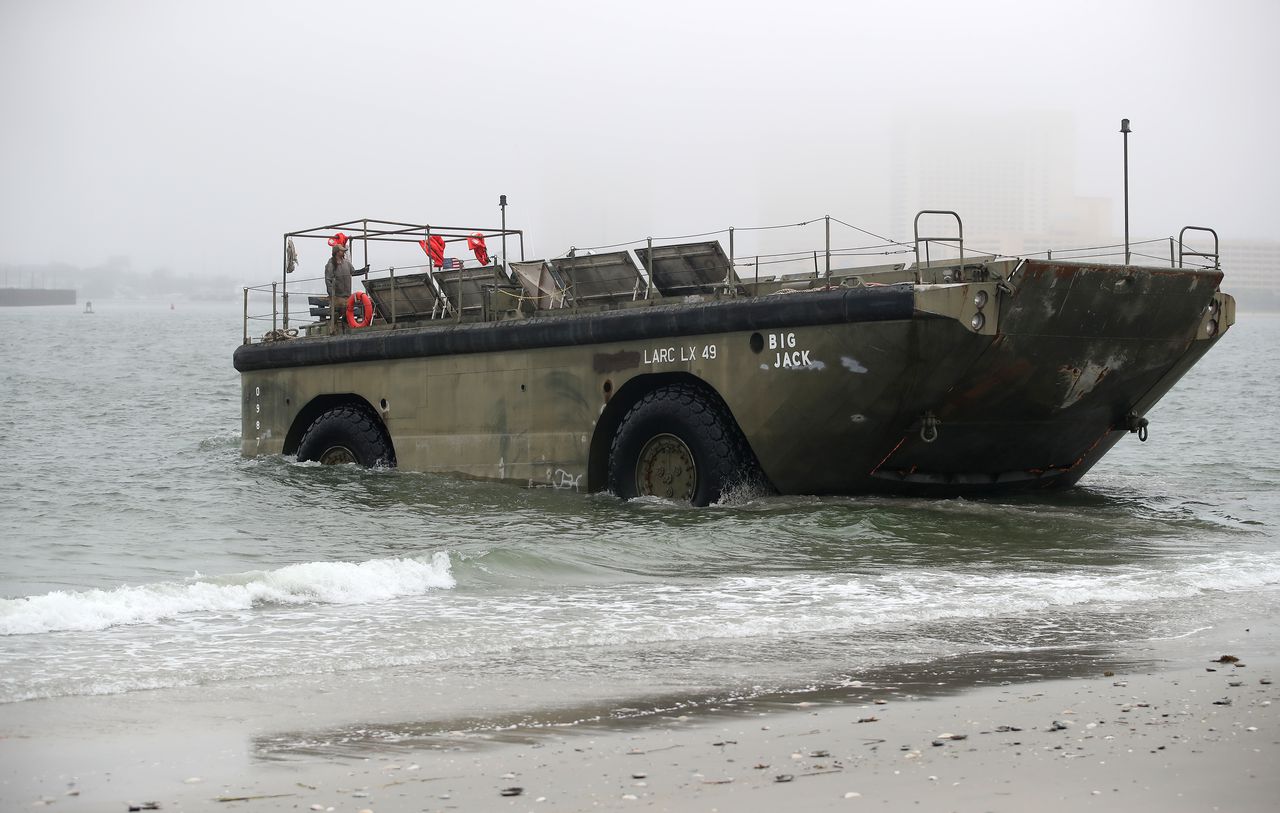 Two Vietnamese-era amphibious vehicles that stopped at Brigantine when one of them suffered a hydraulic line break left just before noon on Friday.

The two amphibious vehicles had previously stopped at Island Beach State Park and Barnegat Light as they attempted to travel from New York to Virginia on a trip marred by breakdowns and repairs along the coast of New Jersey.

Under the fog and haze, the crew of five started the engines of the two vehicles – called “Wild Sally” and “Big Jack” – and slowly backed away from the beach as a small crowd gathered to watch.

“We realized that one of the old steel hydraulic lines had broken,” John Hennage, one of the operators, told NJ Advance Media on Tuesday as he collected the needed parts in Virginia.

Amphibious vehicles, which were previously used by the army, are called LARC, for lighter amphibious supply cargo, or sometimes LARC-LX.

Hennage said only 60 of the LARC-LX amphibious vehicles were built, starting in the 1950s. The two his sister purchased from a Staten Island company, known as #48 and #49, were built between the early and mid-1960s.

He was one of five crew members helping drive the two vehicles to Aberdeen, Maryland, from Staten Island for a business his sister is starting for marine construction. The vehicles will then travel to Tappahannock, Va., he said.

They set off on May 16 for what was supposed to be a roughly 36-hour trip to their first stop in Maryland, but a clogged fuel line forced them to stop at Island Beach State Park. They did enough work to get going before stopping at Barnegat Light to finish, Hennage said.

It wasn’t long before they were back ashore at Brigantine for further repairs.

As the holiday weekend approached, Hennage was told by city officials that vehicles were to leave the beach on Friday.

Their next stop will be Cape May to refuel, Hennage said before retiring. Riding into the wind and a storm approaching the coast could slow them down.

The massive vehicles stood out on the beach. It turned out to be a perfect photo op as people pulled their Jeeps together for a quick photo just to show the difference in size.

“Big Jack” was the first to slowly back into Absecon Inlet as crew member Jack Boyd waved to the crowd. A few minutes later, “Wild Sally” followed.

Mark Collins and his wife, Kristie, of Winslow, parked the huge vehicles in their white Jeep Rubicon just in time to watch the show.

“Seeing them take off was really impressive and brought back a lot of memories of standing on the dock watching the ships pull back,” said Collins, who served in the Navy from 1989 to 1995.

Collins, who is a pilot for Spirit Airlines, compared watching vehicles take off to watching planes take off.

“Something that big can be on the ground and then in the air a few minutes later. Same thing with something like this…crossing the beach into the ocean,” he said.

As the vehicles slowly passed the Brigantine Beach pier, they disappeared into the fog, leaving behind only their huge tire tracks in the sand as a reminder of their stay.

Our journalism needs your support. Please subscribe today to NJ.com.

Suit will seek to stop the relocation of 5,000 Marines to Guam | Guam News