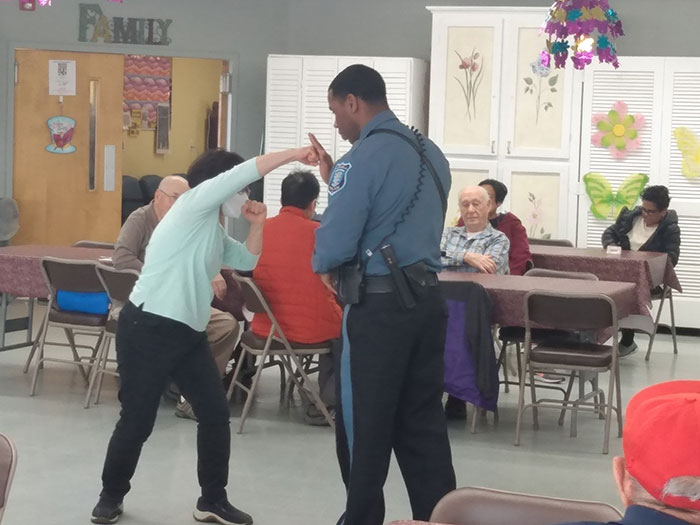 Boxing will be taught at the Howell Senior Center

The idea for the program came from the Howell Police Department’s close association with Melanie Decker, director of senior services at the center. The senior center has held programs such as Bingo with the Police and Coffee with a Cop in the past, but boxing was never offered until 2022.

“It’s our first time,” Decker said of the boxing lessons. “We’ve never taught it before. I work a lot with Howell PAL and [they] contacted me and asked me if I wanted to do a boxing program.

Officer Headd was the natural choice to serve as an instructor for the class, as he ran the Police Athletic League’s Headd Strong Boxing program, teaching the sport to approximately 30 young prospects. A former Marine, Headd was a member of the All-Marine Boxing Team and competed across the country before being inducted into the Marine Corps Boxing Hall of Fame. As a youth coach, two of his current students, ages 11 and 13, recently won the titles in their respective weight classes. Although already heavily involved in the community, Headd will teach the class without payment for his services.

“Part of his role at PAL was definitely community involvement,” Decker said. “Even being back on the road, he does it like his lunch break. He is not paid. Any other program I run, they get paid. I need a minimum of ten or fifteen people because it’s just not fiscally sound to pay someone and not have enough participation.

After being introduced to the group by Decker, Headd took the mic and gave a brief overview of himself. But he quickly engaged the audience with explanations of the principles of boxing and physical demonstrations of what would be learned if someone signed up for the class, but with a bit of humor.

During the hour-long demonstration, Headd taught basic boxing stances, head movement and foot work with several volunteers from the audience. The program will serve to provide participants with a cardio workout, but will also teach some basic self-defense moves.

“Are they going to hit each other? Absolutely not,” Decker explained. “They’re not going to do that. Nate is going to look and see what the members want, and he’s going to tailor that to their needs and abilities.

Course lessons will begin with a warm-up session, with lessons progressing through hand-eye coordination drills, learning punch combinations, and participating in shadow boxing drills while wearing gloves. boxing. The sessions then ended with a series of stretching exercises to cool down.

“When people think of boxing, they think of young, twenty-something competitors,” Headd said. “But with that he does a lot of good things to keep your mind, to keep your health, to keep your heart rate up. It’s not really crazy cardio, but it’s something that gets the body moving and it’s fun.

In addition to the physical benefits to be gained from boxing, there are skills that will be learned that can aid in self-defense.

“As a combat sport, you can definitely use it for self-defense,” Headd explained. “People know the self-defense part, but don’t know how [boxing] actually helps you mentally and physically to make you a healthier person.

“Coach Headd also teaches self-defense,” Decker said, “so he’ll bypass it not only to [student’s] abilities, but also to defend themselves [moves]. And, we discussed in the future maybe doing some self-defense classes.

The Senior Center had hoped that perhaps 10 seniors would sign up for the course, but by the end of Officer Headd’s demonstration, more than double that number had signed up. Registration is still open for all Senior Center members who wish to participate.

“We’ll see how many people want to do it,” Decker said. “It’s wonderful. We got a lot of calls about it.

The boxing classes are just the latest in a series of programs to engage members of the Howell Senior Center.

“We welcome sixty years [old] after a hundred years, and we want to offer a bit of something for everyone,” Decker explained of the Senior Center schedule. “We have aerobics twice a week and chair yoga twice a week, and we have a great audience for both. On Tuesdays we shoot, and we do tai chi for several weeks. Right now it’s “Meditation and Mindfulness”. We had Qigong, we had line dancing, so now boxing is something new.

The seven-week course is scheduled to start at Howell Senior Center from May 17 and will run every Tuesday between 1.15 and 2.15 p.m. until June 28. Pre-registration for one-hour classes is required and those interested should call the Senior Center at 732-938-4500 ext. 2550 for details.