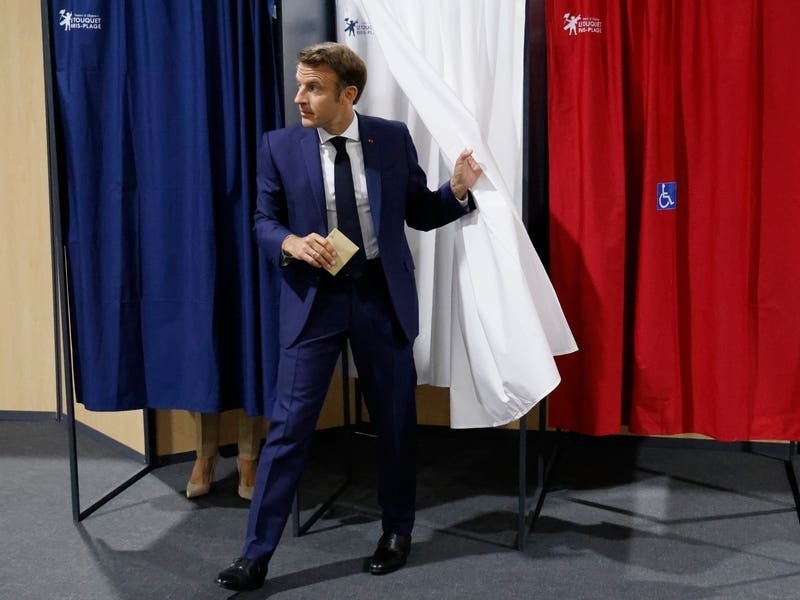 French President Emmanuel Macron’s centrist alliance is expected to retain its parliamentary majority after the first round of voting, according to projections on Sunday.

Projections based on partial election results showed that nationally, Mr Macron’s party and its allies won around 25-26% of the vote.

This put them neck and neck with a new left-wing coalition made up of hard-left supporters, socialists and environmentalists.

More than 6,000 candidates, ranging in age from 18 to 92, were running for 577 seats in the French National Assembly in the first round of elections on Sunday.

The two-round voting system is complex and not commensurate with national support for a party. For the French races that did not have a decisive winner on Sunday, up to four candidates who obtain at least 12.5% ​​support will face each other in a second round of voting on June 19.

Hard-left leader Jean-Luc Melenchon, who had hoped the election would propel him to the post of prime minister, was only among a small number of voters as he cast his ballot in Marseille, a southern port city.

On the opposite coast of France, a small crowd gathered to watch Mr Macron as he arrived to vote in the English Channel resort town of Le Touquet.

Following Mr Macron’s re-election in May, his centrist coalition was seeking an outright majority that would allow him to implement his campaign promises, including tax cuts and raising France’s retirement age from 62 at age 65.

But Sunday’s projection shows the party and Mr Macron’s allies could struggle to secure more than half of the assembly seats this time around.

Polling agencies have estimated that Mr. Macron’s centrists could win anywhere from 255 to more than 300 seats, while Mr. Melenchon’s left-wing coalition could win more than 200 seats.

The National Assembly has the last word over the Senate with regard to the passing of laws.

Mr Melenchon’s platform includes a significant increase in the minimum wage, lowering the retirement age to 60 and freezing energy prices, which have soared due to the war in Ukraine. He is an anti-globalization arsonist who has called on France to withdraw from NATO and “disobey” EU rules.