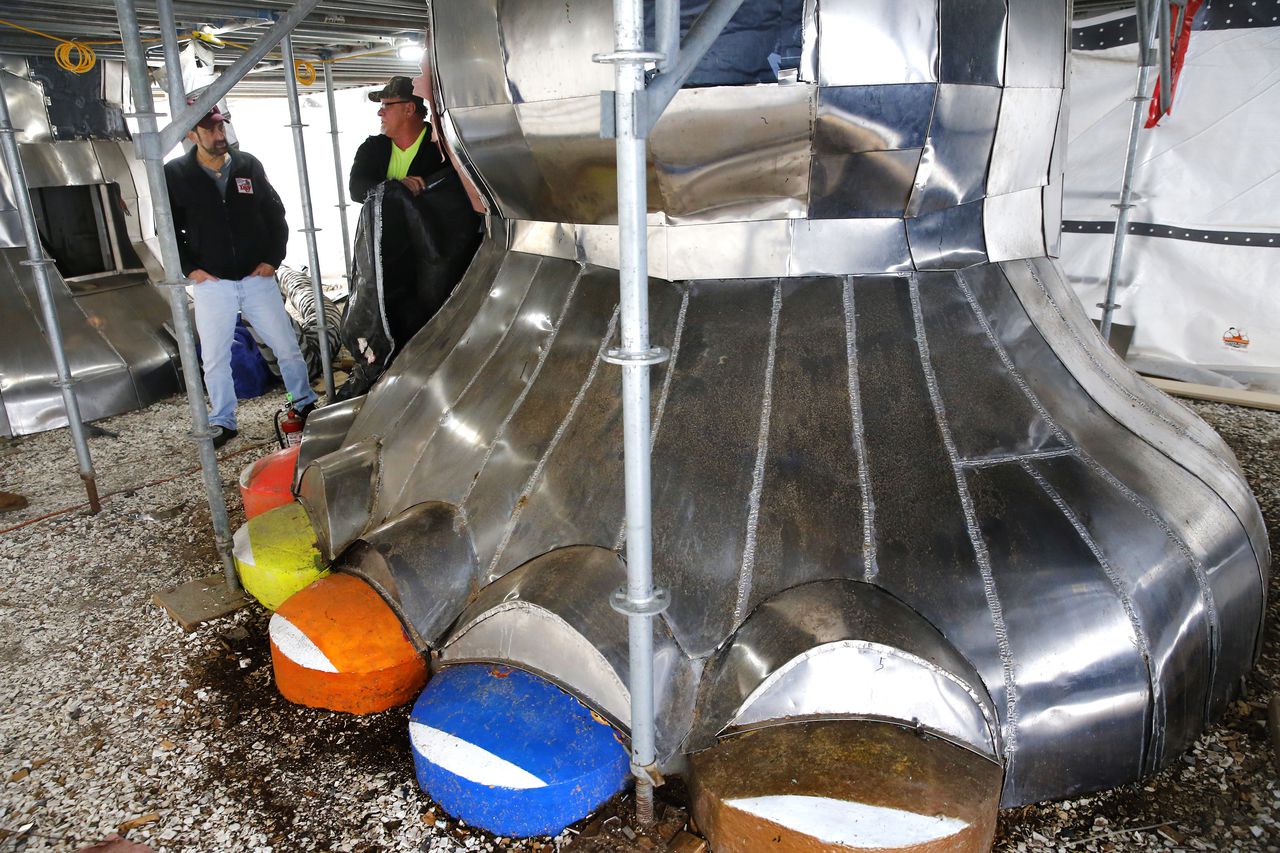 Jersey Shore Landmark Lucy the Elephant Gets a $2 Million Makeover

Drills, saws and grinders could be heard buzzing and roaring through the ocean air on a recent weekday in Margate as Lucy the Elephant – Jersey Shore’s popular attraction – gets a major facelift.

The six-story elephant – known as the nation’s tallest roadside attraction – is undergoing a $2 million restoration project. But you wouldn’t know that, since her whole body — yes, Lucy is a he despite what you might assume from the painted fingernails and the name — has been covered in a huge tarp since work began at the fall.

It was built as a tourist attraction in Margate in 1881, slated for demolition after years of neglect, and eventually saved and moved to a new location a few blocks away. Lucy – designated in 1976 as a National Historic Landmark – has sat there ever since.

Thousands of visitors come from near and far and pay a fee to tour Lucy’s interior and climb the stairs to the horse-drawn carriage on her back for ocean views.

But maintaining Lucy’s beauty isn’t easy. The project currently underway, which has kept Lucy off limits to tourists since September, includes removing the metal cladding covering the exterior which had rusted and let in water.

Underneath, the wooden cladding was damaged and is now repaired and replaced. A new metal made of a nickel-copper alloy that will withstand marine environments is added to its exterior before it receives a fresh coat of paint.

“We’ve wanted to do this job for a while,” Daniel McDonald, spokesperson for the attraction, told NJ Advance Media. “Now, with all the downturn the pandemic has caused, is the perfect time.”

Initially, the cost of restoring Lucy was estimated at $1.4 million. When it came time to start construction in 2021, the actual cost had far exceeded what they had anticipated due to unforeseen supply chain delays and materials they didn’t expect to need.

All work on Lucy is funded by the Save Lucy Committee, Inc. as well as grants from the Preserve NJ Preservation Fund and the National Park Service.

Covered in tarpaulins, with the sound of metal clanking and paint hitting the ground, the six-story elephant remained hidden while repairs to its interior continued.

“As we started stripping the paint, we found the metal was very rotten,” CEO Richard Helfant told NJ Advance Media during a recent behind-the-scenes tour. “We decided to just replace it because it would cost more to strip and repair the metal than just replacing it.”

For the second phase, water infiltration was a recurring structural problem that needed to be addressed. Over the months, Lucy was plagued by snow, rains and other natural events that necessitated repairs.

Phase three is expected to begin in the coming weeks and will involve more painting of the interior of the structure, followed by re-flooring and repairing damaged plaster.

“We anticipate that phase two of the renovations will be complete by the end of the summer,” Helfant told NJ Advance Media as he strolled through the property on a recent weekday afternoon. “However, all three phases are expected to be completed by mid-August”

Thank you for counting on us to deliver local news you can trust. Please consider supporting NJ.com with voluntary subscription.

The Boys give A-Train a cool new costume