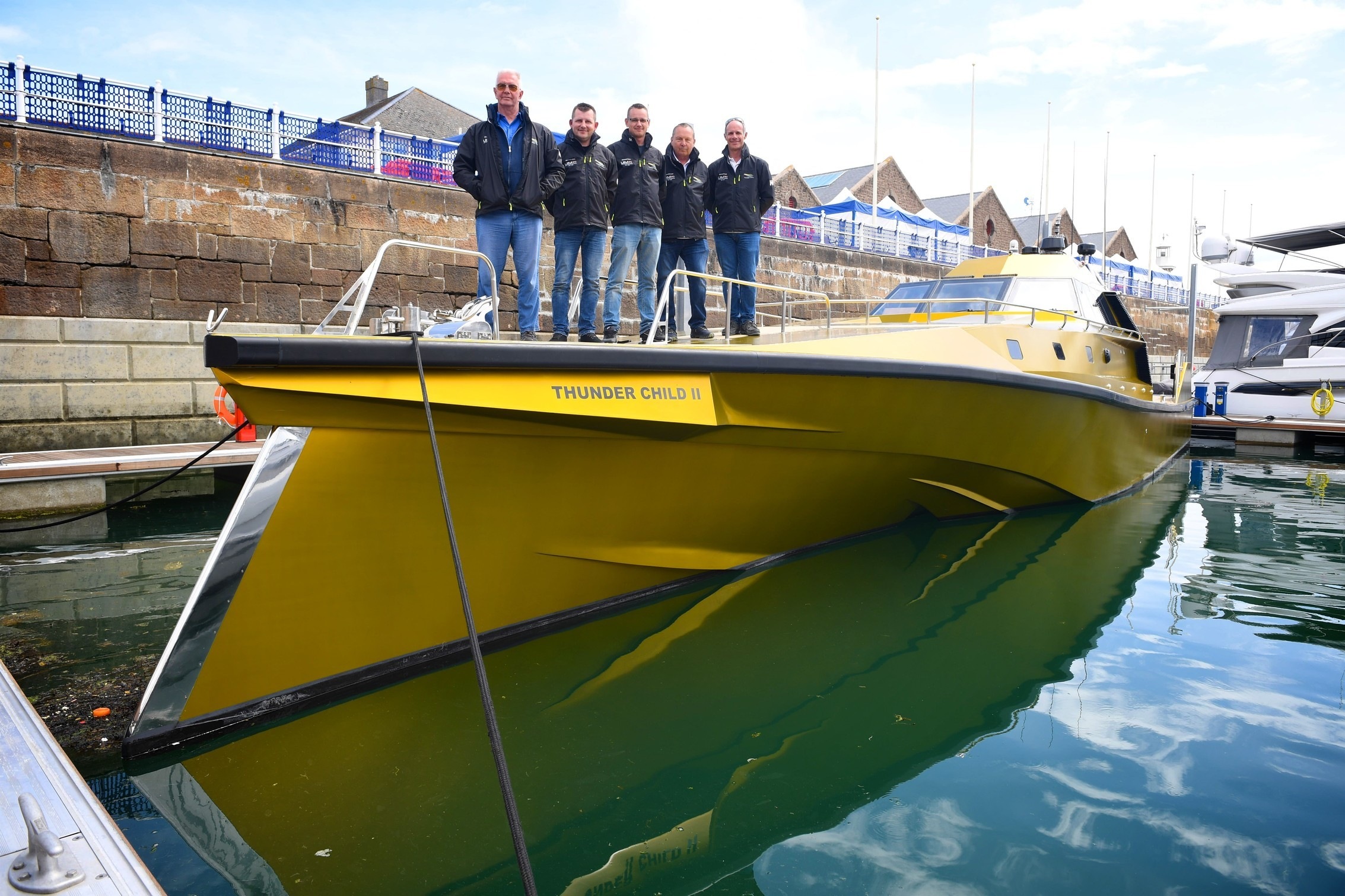 AS THE fastest ship in town for this weekend’s Barclays Jersey Boat Show, Thunder Child II falls into the ‘price on request’ category.

With a top speed of over 50 knots, four 8.3-litre V12 engines and a driver’s seat costing £27,000, the 23-metre yellow motorboat is set to be a show highlight, returning to the island after having been canceled for the past two years due to the pandemic.

Thunder Child II arrived at St Helier Marina in style earlier this week after a record-breaking run from Cork in Ireland.

Islander and boat owner Nick Ogden was part of a five-man crew alongside designer and skipper Frank Kowalski and three others for the 302-nautical-mile voyage to the southwestern tip of Cornwall, then in the Channel.

After leaving Cork shortly after dawn, the crew made it to St Helier in time for a late lunch, and soon after they were able to celebrate when the powerboat racing governing body, the Union Internationale Motonautique, ratified their time of eight hours 52 minutes as a record for the trip.

With a range of 750 nautical miles and a cruising speed of over 40 knots, Thunder Child II was built to break records – you won’t find an inch-thick ballistic glass windshield on a average pleasure. He has already been credited with setting new marks for the race between Ireland and Iceland, as well as Cork’s ‘sprint’ course around Fastnet Rock.

Later this summer the ambition is to set a record time for the journey between London and Monaco, but before that there are plans for a quick tour of Jersey next week when all four passenger seats of Thunder Child II will be at to win.

During the boat show weekend, 2,000 tickets will be sold at £5 each, with two lucky winners having the chance to board and the raffle proceeds going to Jersey Hospice Care. The remaining places were won by two winners of a competition to predict the exact time of the ship’s crossing from Cork.

Having last been staged in May 2019 before being torpedoed by Covid-19 for two consecutive years, the Barclays Jersey Boat Show is back in full force for 2022 and is set to maintain its status as the largest free-entry event in the Channel Islands.

The attractions of the event, which opens at 1 p.m. on Friday and will continue until Sunday afternoon, are both water and land based, with a range of marine and style exhibitors of life as well as exhibitions and demonstrations.

The Royal Navy will bring a P2000 training ship, while Rear Admiral Jude Terry, an Islander who became the first female Navy officer to hold that rank, will be among the guests of the ‘In Conversation With’ interviews hosted by the journalist Lucy Cotter. .

Further details of the Barclays Jersey Boat Show can be found on jerseyboatshow.com and in a supplement to be published with tomorrow’s JEP.