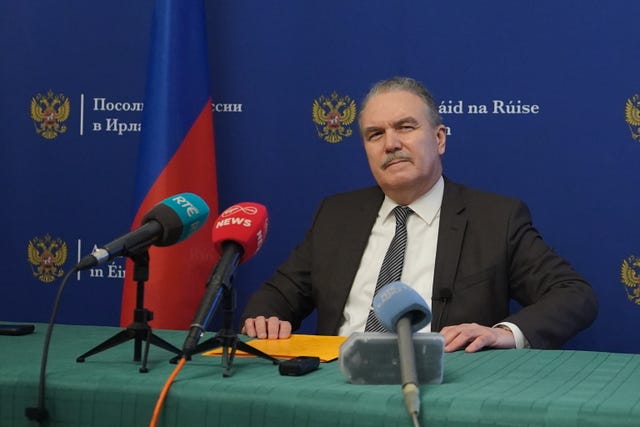 Simon Coveney said on Saturday he had received assurances from his Russian counterpart that the exercises will not take place off the southwest coast of Ireland.

The artillery exercises were due to take place in early February in international waters, but in Irish-controlled airspace and the country’s exclusive economic zone.

The planned exercises had caused considerable upheaval and controversy in Ireland.

“This evening I received a letter confirming that the Russian exercises will be moved outside the Irish EEZ.

“I welcome this response.”

In a statement, Russia’s Ambassador to Ireland, Yury Filatov, said: “In response to requests from the Irish Government as well as the Southern and Western Irish Fish Producers’ Organisation, Minister of the Defense of the Russian Federation, Sergey Shoigu, made a decision.

“As a sign of goodwill, to move the Russian Navy exercises, scheduled for February 3-8, outside of Ireland’s Exclusive Economic Zone (EEZ), with the aim of not interfering with the fishing activities of Irish vessels in traditional fishing areas.”

Irish fishermen had planned to travel to the area to disrupt Russian naval plans in an effort to protect their fishing stock.

Representatives of the Irish fishing industry met the Russian ambassador to Ireland on Thursday, saying later they had been assured that their fishing grounds would not be affected by the navy drills.

This claim was partially disputed by a Russian embassy spokesman, who said it was ‘not true’ that an agreement had been reached on ‘buffer zones’ in the area for boats fishing.

The Department for Transport had also issued a maritime advisory saying the Russian Navy was to carry out maneuvers off the southwest coast of Ireland from next Thursday.

It is unclear where the naval exercises will now take place.